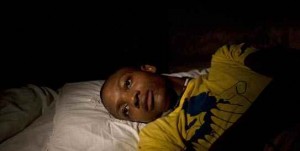 Johny Jean was raped, almost a year ago, by members of the Uruguayan MINUSTAH detachment in Port Salut. When this happened, Johny, and his family reported the crime to the National Police. He was examined by a team of foreign doctors who confirmed the attack. As expected, the MINUSTAH people carried out a full, intensive investigation, finding no truth to the story.

That would have been the end to this unfortunate situation except for one extraordinary event. Local boys were/are in the habit  of trading video music  cell-phone-to-cell-phone with the MINUSTAH soldiers. One young man, in Port Salut, was stunned to find he had downloaded a video from a local Uruguayan sailor showing Johny Jean’s rape by four Uruguayan Sailors. He could identify these peacekeepers.

The victim was his cousin!!

The video clip was aired on ABC and the world focused on this crime.

A team of top American trial attorneys, led by Ed Marger, Congressman Bob Barr and Mike Puglise flew into Haiti to represent Johny Jean. Marger had already contacted the Uruguayan government, in Montevideo. As a result of this,    President Mujica dispatched his Army Chief of Staff, General Borone, and the Navy judge advocate, to Haiti for meetings with Marger’s team.

President Mujica took the unprecedented step of writing a letter of apology to Predident Martelly, and the Haitian people, for the crime.

All that was required was negotiations for a settlement.

These were moving towards a positive outcome.

Unfortunately, some elements are greedy.

Marger had requested a settlement of $5,000,000 and some believed this propaganda to be what would be paid! . He was simply stating a figure to start the negotiations as the Uruguayans suggested $30,000.

Fritz Dorziain, who had himself listed, as an avocat, with one ministry, jumped in – sometime in December/January  and managed to get the illiterates,   Johny Jean, and his family members,  to sign a Mandat, giving  Dorziair power of attorney to do  what  had already been completed and done.

No one has seen this Mandat/Power of Attorney!

It  probably gave him the right to retain attorneys when Johny already possessed top level American and Haitian legal representation. It also gave him the authority to do all other things, that had already been accomplished. But, most importantly, it probably gave him complete and total control over Johny Jean and the millions of $$ Dorziair thinks will be paid on May 10th!!

Dorziair’s interference was a gift of unbelievable value for the Uruguayans,  who – before  Dorziain’s appearance- were faced with a powerful American negotiating team. Now they had some inexperienced Haitian who said he was a lawyer (when he is nothing but the operator of a small guest house)   trying to take over the case.

At one point he tried to have the Americans fired, and they were working on their own money and time!! The Marger team had invested a small fortune, plus their reputations, in the battle for Johny Jean, and they were winning!

Cynics have suggested that Dorziair has done this for Uruguay,  either out of complete and total stupidity, or because he was paid. Of course it could be the mixture of both.  His meddling has seen Uruguay go from an apologetic stand,  wanting to pay compensation –  to one in which they now  maintain their sailors are innocent and they should pay nothing.

There are several  problems. Johny Jean, and his family cannot read or write, and they were not given a copy of the Mandat they signed.

As late as May 7, with a May 10 court appearance in Uruguay scheduled, they still hadn’t received a copy of the Mandat, although they have made continued request.

In the United States at least one person would be facing  criminal charges for what has transpired, and what continues.

At an earlier moment, Parliament gave 400,000 gourdes to Fritz Doziair, for Johny Jean. The guy transmitting this cash – equivalent of $10,000 American, was Senator Beauplan. He took $2000 and passed $8000 on to Dorziair…who kept the rest. Johny Jean did not get a single gourde.

Dorziair is supposedly working for Johny’s best interests. But there are indications that he has made a deal with the Uruguayan/MINUSTAH people to sell the case.

Dorziair has done everything in his power to have the powerful American attorneys removed from the case, so he can control it.  This would be funny, if it wasn’t to bizarre and dangerous for the fair outcome already worked out by Ed Marger, and his team.

Dorziair  managed to coordinate things so that Johny Jean would be flown into Montevideo May 10, at 9:30 A.M. for a 2 P.M. court appearance at which only two lawyers (Dorziair and a Haitian) would be admitted. The Americans, who arrived in Uruguay on the 5th, would not be admitted.

There was absolutely no arrangement for an English translation!! In other words, Dorziair’s interference had created a situation in which the American team would be neutralized when it arrived in Montevideo.

The timing was horrific. Imagine Johny Jean, who has never been out of the country, or on an aircraft, arriving in Montevideo at 9:30 A.M. – if the aircraft wasn’t late …and on most occasions it is late… And then be  expected to have any sort of mental balance for a court appearance 4  hours after arriving?!!

No time for a briefing by lawyers with his interests at heart.

This is a carefully manufactured formula for disaster.

Marger managed to have Johny Jean brought to Uruguay at an earlier date, allowing some time for Johny to acclimatize, but nothing can, or will, undo the damage done by Fritz Dorziair!!

The May 10 hearing is simply a tribunal that will collect evidence, to see if a crime was committed.

There will be no bag of cash carried away from the May 10 appearance, as Dorziair has promised people in Haiti.  Some suggest he has used the promise of a huge treasure, to obtain funds from other greedy Haitians, wanting to share in the pot of gold!

Before  Dorziair’s betrayal of trust, there was every indication that the judge would rule that sufficient evidence existed for the trial to convene. Now, we must have strong expectations for the judge to rule that no crime occurred and the sailors will be freed.

Dorziair, the operator of a small guest house in Port Salut, could not possibly know what was happening in the Marger negotiations through the embassies of Uruguay in Washington and New York, or via his contacts with the United Nations, General Borone and the Naval Judge Advocate in Uruguay. Or with Marger’s contacts within the American government, contact  capable of bringing pressure to bear on Uruguayan authorities.

I am sorry Johny Jean.

Drop your pants and bend over.